In lieu of the postponed 2020 State Rally, we held a 'show and shine' event alongside the Westbury Rotary Car Club Show. A brilliant turnout of cars was on hand, and despite a cold breeze, it was a great day.

A good turnout for our second midweek run. This time, we went via the East Tamar highway, detouring via Dilston to avoid some roadworks, Then, over the Batman Bridge to Beauty Point, where we had a great lunch at the Tamar Cove restaurant.

At last we had a run after lockdown and restrictions! Some 22 members met up at the Verve Cafe, then headed off in good weather. Stopping at Ranelagh for a quick coffee and snack, we then proceeded via New Norfolk and Franklin, to our lunch destination at the Kermandie Hotel. Members enjoyed themselves immensely, and lingered until well into the afternoon, finally catching up with friends.

The Christmas Luncheon for 2019 was once again held at Ross, with some 60 members attending. A delicious fully-catered meal was provided free to those attending, and a great time was enjoyed by all. The weather outside was a bit mediocre, but inside there was fun and warmth. A great day. Thanks to Robert and Grant for the photos.

Originally intended as a run to Derwent Bridge, this had to be re-directed due to bad weather conditions. So a run to Dunalley for lunch was substituted. Some 12 members attended, and enjoyed full sunshine and a great meal at the Dunalley Hotel.

Some 6-8 cars enjoyed a "cool, dry and comfortable" run to the Great Lake in October, where they enjoyed a terrific meal at the under-new-management Great Lake Hotel. A most enjoyable day.

Several Southern members joined the PVCC in a run to Orford in September. A bright sunny day, with a great meal afterwards.

Members recently enjoyed a pleasant run via the Channel to Margate, where they had an enjoyable lunch at Brook Fields.

JCCT members from across the state attended this year's 'Picnic at Ross' event. Our thanks to Liam for these pictures, showing just a few of the hundreds of cars on display.

This year's event had to relocated from the Great Lake area to Longford, due to the recent bushfires. A group of some 20 people attended, with Barry Wiggins receiving the Perpetual Trophy for the greatest distance travelled to the event.

Triabunna Classics on the Coast

A Day in the Country

Britain to Bunna / Take Your Tops Off

'Take Your Tops Off'

"Take Your Tops Off"

An extremely successful rally, with excellent weather throughout.  Numbers were down slightly in the Concours event, but everyone had a great time.

The 2012 JCCT State Rally was held in Launceston, with the Concours at the historic Entally estate.  A very successful day, in spite of the extremely hot weather!

The 2011 JCCT State Rally was held in Hobart.  Unfortunately the Saturday Concours was conducted in atrocious conditions, and we had to retire to a nearby car park to complete the judging. 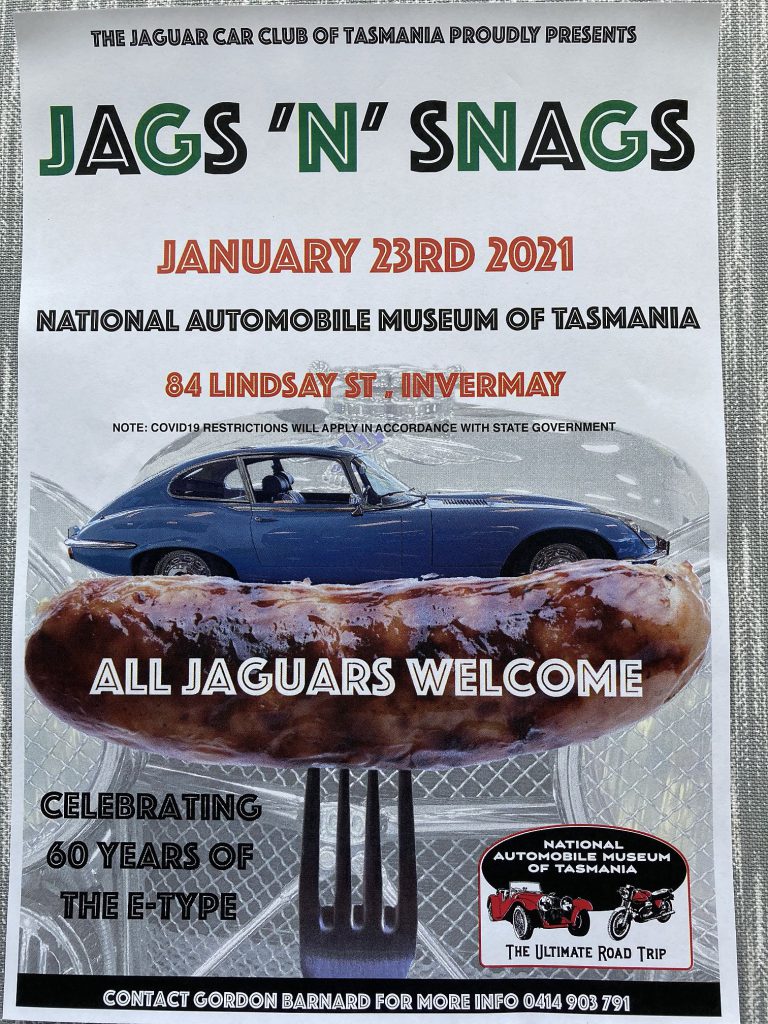 DATE CHANGE – Moved to Saturday 23rd January to avoid clash with Simmons Plains racing. Lamenting the fact that Bunnings Sausage Sizzle has gone into lockdown? Why not join us at the National Automobile Museum in Launceston for a Midsummer … END_OF_DOCUMENT_TOKEN_TO_BE_REPLACED
Jan
31
Sun
8:30 am Memorial run to Freycinet – DATE...
Memorial run to Freycinet – DATE...
Jan 31 @ 8:30 am
DATE CHANGED Due to a date clash with the Post-Vintage South East Rally, the date for this memorial run has been changed. Our annual Memorial run in honour of those members who have passed on will be to the East … END_OF_DOCUMENT_TOKEN_TO_BE_REPLACED
Feb
3
Wed
all-day Southern Car Enthusiasts Midweek...
Southern Car Enthusiasts Midweek...
Feb 3 all-day
2021 Car Enthusiast dates – the schedule is below, for you to diarise now. As you all know, it’s the first Wednesday of each month, starting February. February – Wednesday 3rd. This has been booked and has similar arrangements to … END_OF_DOCUMENT_TOKEN_TO_BE_REPLACED