Sometimes, driving an older jaguar without power steering can at times be described as being “Character Building”.

I have long wanted to fit a steering ‘upgrade’ to my Mk 2, and decided that as the car is only used for pleasure that I should try and demonstrate in theory that it was a measurable improvement, otherwise it could easily end up just being ‘different’, not necessarily ‘better’ and any improvements made would be difficult to prove on the road (compared to a competition car with lap times & tyre temperatures etc).

So the ground rules were:

Without a doubt the best solution is to install the variable ratio Marles Varamatic power assisted steering as fitted to late Mk 2’s and other ‘Compact’ Jags as it is a straight bolt-in upgrade with no need for a ‘modification permit’, just a standard road worthy inspection.

Issues to consider though, sourcing and servicing one of these units now and in years to come can be expensive.

Some comments have been made that they are a ‘little on the light side’ and ‘flighty’ compared to modern cars – which can be overcome with increased caster, but ‘Toe-in-on bump’ (which is the most undesirable type of bump steer) then becomes an issue that would be difficult to resolve

A common rack conversion is to fit an XJ rack (the later XJS and S111 being the preferred), although I used an earlier S1 rack for evaluation (I believe they are the same dimensionally in rack shaft, mounting & travel for my evaluation purposes). The rack is quite wide for these cars, which means the steering arms are short, causing significant ‘Toe-out’ bump steer over the full travel of the suspension. The rack can be positioned to reduce the effect upon bump, but exaggerates it on droop – the effect on the over-all steering (on paper that is) doesn’t look that inviting.

Another issue with all rack conversions is Ackerman (where the inside wheel turns sharper than the outside wheel).

The original steering on these model Jaguars move the drag link in multiple planes as it pivots around the axis of the steering box & idler shafts resulting in a greater loss of turn to the outside wheel than the inside wheel.

A correctly positioned rack on the other hand will produce Ackerman effect by gaining turn to the inside wheel. The advantage of this is that the same steering lock can be achieved with less travel.

Unfortunately, to achieve the same Ackerman as the original, the rack needs to be located a lot further back, which then gets more complicated, as the angle of the suspension arm pivots on these Jags require the inner pivot of the steering rods to move inwards (so the further it’s moved backwards the shorter the rack has to be).

At this point I felt the number of compromises was beginning to out weigh any possible gains and packed the whole lot away with the intention to save my pennies for a Marles unit, until I observed another known conversion using a modified VB-VK Commodore manual rack (also commonly used in the hot-rod community)

Being modified (shortened) means the steering arms can be closer to the correct length to overcome the bump steer issue,

It is very compact without the hydraulics for power assist, thus allowing positioning it that bit further back to help Ackerman (every mm counts)

Due to the ratio being 27.5:1 on centre and 25.6:1 at full lock, the steering wheel will be easier to turn with similar turn’s lock-to-lock as the original.

I had some reservations it would not be enough advantage for the parking assistance I was seeking so I returned to investigating other power racks.

The Power Assisted rack I eventually chose for the conversion is a variable ratio unit (but not ‘variable assist’) from the VL–VS Commodore range. These are all basically the same unit with ‘cosmetic’ changes like coupling shaft connections and tube routing to suit the various engines across the model ranges.

These cars also have similar specifications to the Mk 2, which satisfies the requirements of the transport department. There were other racks from smaller cars that better suited the narrow Mk 2, but would not have gained a ‘modification approval’ due to their lighter vehicle mass without some serious math to support the proposal.

The Commodore rack is a also bit smaller than the jag unit, so the bump steer can be kept to about 15’(minutes of degree) toe out @ 60 mm above & below ride height, Provision for shimming can allow for any anomalies in the existing suspension sub frame due to manufacturing variations.

There is a loss of Ackerman though, (rack really needs to be back another 41 mm) which does cause slight scrubbing on full lock, but due to the outside wheel turning sharper than the original the overall turning circle is only increased by 1 meter

The difference in driving the car is unbelievable!

I had not realised how much compliance there is in conventional high profile radial tyres, as they completely absorb the minor bump steer and Ackerman issues, and I now understand why the Jaguar rack conversion is accepted by so many.

As I manufactured this unit to allow for a higher caster setting, the steering is nicely weighted for the radial tyres and the steering wheel rotation is similar to the original up to approx. 5° turn of the road wheels. The road feel is very good due to the on-centre relief which reduces the power assistance by allowing some oil to bypass the piston in the bore of the rack. The big advantage is when navigating intersections & parking lots where the power assist and the variable ratio quickly come into effect (23:1 on centre and 16.5:1 at full lock) and 2.7 turns total lock to lock.

National Guidelines for the Construction and Modification of Street Rods in Australia, section 4

Those Steering notes in pictures: 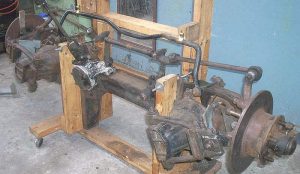 Standard steering & suspension setup to measure the base points 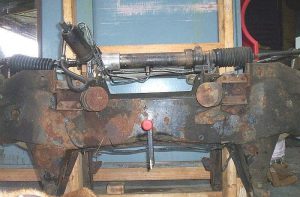 Early VK Commodore manual rack
shortened & mounted to clear sump
and sway bar, bump steer is good
but all the racks really need to be back
another 40 mm for ideal Ackerman 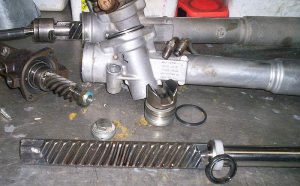 Difference between the original & new steering shafts – although in the final installation I used the rubber bushed end of the Commodore shaft, and it was slightly longer due to the VS rack having a different coupling arrangement 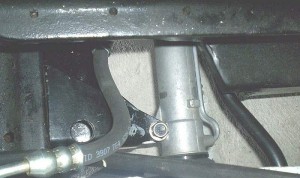 Final bracket made from 4mm steel needed a couple more relief holes for access to the retaining bolts. 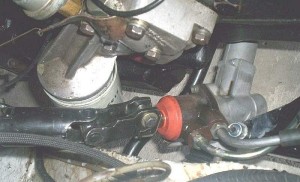 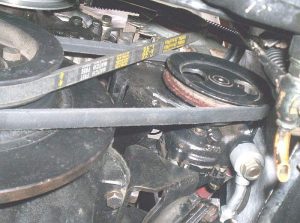 Pump is a small Japanese unit (Mitsubishi I
think) mounted under the alternator, double
pulley on the crankshaft is custom made. 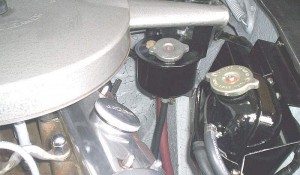 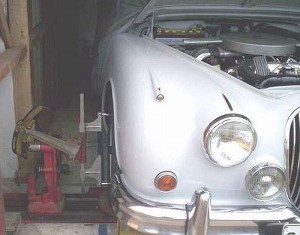 Final set up to the wheel alignment – I made
allowance in the bracket for as much caster as
I could get, currently set at +2° caster