To be sure of fitting the correct replacement oxygen sensor it is good to have an understanding of the different types. The most common is the Zirconia (zirconia dioxide) sensor, which comes in heated and unheated form. There are two different types of zirconia sensor and some manufacturers use Titania (titanium dioxide) oxygen sensors.

Below is a general overview of each type of oxygen sensor:

Titania:
Element type – titanium dioxide, planar
Types available – three and four wire 12mm and 18mm thread
Heater resistance – 4 to 7 ohms.
Output signal – oscillating between 0 and 1 volt or between 0 and 5 volts (depending on make and number of wires).

The Oxygen Sensor (also known as O2 or Lambda Sensor) is located in the exhaust manifold and measures the amount of unburned oxygen in your engine’s exhaust. Based on the amount of oxygen, it sends a signal to your engine computer which then adjusts the air/fuel mixture for optimum engine performance and emission control.

a.. Excessive fuel consumption, a faulty oxygen sensor can waste 30% of your fuel.
b.. Driveability problems, such as engine surging or hesitation.
c.. High hydrocarbon emissions, failing an emissions inspection.
d.. The engine warning light may be on or service flag displayed.
e.. The ecu/computer stores a mixture-related fault code.
f.. When the oxygen sensor has stopped functioning completely,the catalytic converter may overheat and fail.

The Lambda Sensor is at the heart of emission control continually monitoring the exhaust gas. Carbon Monoxide (CO) is produced by the engine. If the mixture supplied is too rich then CO will be high and visa versa. Having plenty of fuel (Rich) the engine will try to burn as much as possible, using up all available Oxygen. Conversely if there is not sufficient fuel to maintain a correct burn then the excess Oxygen will pass into the exhaust system.

The Zirconia lambda sensor, by using precious metals, can determine the Oxygen difference between atmosphere and the exhaust gasses. The greater this difference, the higher the voltage it will produce, up to app 1volt. Lambda sensors will not operate until around 300 deg. They are heated by the exhaust and often have their own heater element. Single and twin wire lambda sensors have no heater element and are usually situated near or in the manifold, three and four wire sensors have an built in heater to aid rapid warm-up and may be placed further downstream.

From the table it can be seen that the voltage produced changes significantly within the window lambda 0.97 – 1.03. The ECU monitors this voltage and can correct the mixture strength (by changing the injector open time) to try to maintain perfect combustion.

The sensor can be tested for output by connecting it to a digital voltmeter, set to a 2v scale. Connect the +ve test lead to the sensor signal wire [See wire colours] and the -ve test lead to earth/battery -ve. The voltage produced should swing from app 0.2v to 0.8v and back around once per second. If the voltage is stuck high then the engine is probably running rich for some other reason. If stuck low then usually either a faulty Lambda Sensor, air leak or an engine running very weak for some reason.

The newer type of lambda O2 sensor (titania) work on a different principle, changing a supplied voltage as against creating one, but they still measures the Oxygen differences.

These later types are generally more accurate and responsive. 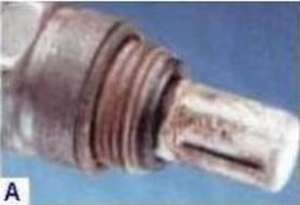 A: Antifreeze Contamination
Antifreeze in the exhaust will attack and destroy the sensing element. A leaking head gasket commonly causes antifreeze contamination. 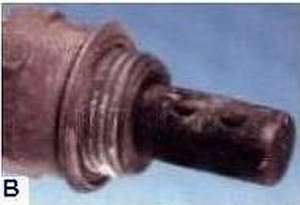 B: Rich Fuel Mixture
This will cause a heavy black carbon layer to form on the sensor element. Rich fuel mixture is usually caused by a failure in the air/fuel metering system. 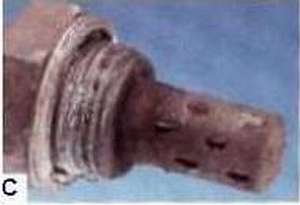 C: High Oil Consumption
This will coat the sensing element with a crusty, brown layer. Worn piston rings and valve guides, or other internal engine problems can cause high oil consumption. 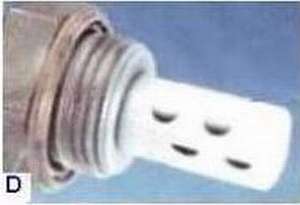