Like most owners of older cars, I tend to have a list of projects that would be nice to do one day when time and money allows (and usually some incident to act as a catalyst or trigger)

The headlining in the Mk2 has never been its best with some nasty water marks from rear screen leaks prior to me becoming the current “caretaker”, and a wet June long weekend soon highlighted that the 55 year old rubber seal was past its use by date with another leak , so there was no point in fixing one and not the other.

The wonderful thing about digital cameras is that pictures are cheap! So I photographed just about everything I could, before, during & after, and you would be surprised how many times I had to go back to them – even for the simplest of things, like which way do the claws on the finisher clip face?

The rubber is cut away progressively – first to remove the chrome strip (which is also glued to the rubber on the rear screen!), then to remove the glass. The rubber & sealer were so hard in places I had to resort to a sharp wood chisel.

After carefully removing the timber capping’s and other trim, the next step is to remove all the little staples along each side and peel the glued lining from the window aperture. In this car the lining didn’t go under front screen seal, (I suspect it had been cut back when the windscreen was replaced – the glue and timber strip had held it well, so the same will apply to the new lining). Finally it’s a simple process to turn each bar down and spring them out of the body brackets (I should probably mention here about the dust that has accumulated up there for the last 55 years too!)
The old lining is laid out and each bar is marked with its location, removed and cleaned.

After a bit of a wait for the new lining to arrive, (plenty of time to repair/replace the sound deadening), the loops are cut to the same length as the old ones and the bars fitted back in correct order.

At this point cleanliness is paramount, even with drop sheet in the car I still carried the new lining into the car inside a clean sheet ( easier to wash a dirty sheet any day !)

Using a variety of pegboard pins, whiteboard magnets and bulldog clips, the lining is tensioned both ways. If I wasn’t happy with something I would leave it a day before unpinning to allow the cloth to settle.

Once happy I started from the front, gluing and stapling my way towards the back.

After the glue had dried around the window aperture, I rubbed some neutral cure silicon into the material, so if any water does get under the seal again it won’t wick inside the car.

The new rubber is fitted to the screen and as per the manual – cord is wrapped twice with the tails at the top (definitely need the 2 wraps as the first one doesn’t get the rubber over the lip properly in a couple places). As it was the middle of winter (some remote areas even had a dusting of snow on the ground), it had a day or so inside in the warm to ensure the rubber was nice and supple.

After the screen is in, I spread a little bit of ‘Vas’ on the paint before applying the sealer under the rubber (that stuff gets everywhere and sticks to everything!), made it a little easier to clean off the excess. Refitting the Chrome strip is nearly a story on its own!

Finally the sun visors get re-trimmed, the foam I had was a little too dense and distorted the boards, so I kept punching holes until it felt right. 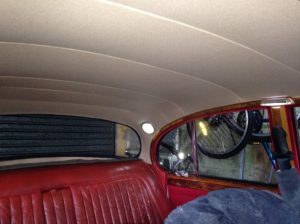 Timber, lights & seats refitted – time for a beer & admire the handy work! -Wasn’t too difficult, just took my time (and washed my hands a lot!)