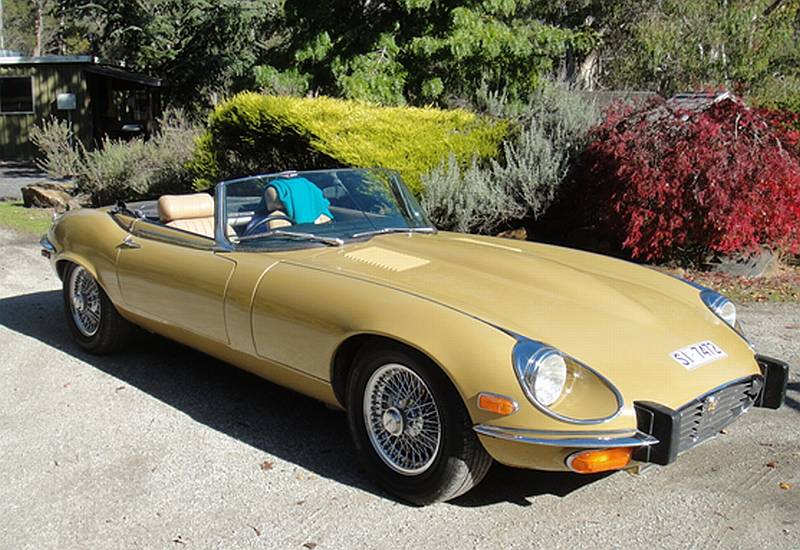 Welcome back to any readers who may have read Part One where we changed from LHD to RHD, auto transmission to 5 a speed manual gearbox and completely reconditioned the engine and engine bay.
While this is Part Two of the Project, it is a ‘stand alone’ article and documents the following work which was slowly carried out over 10 months from May ’14 to March ’15.
Even when I bought the car, it was always my intention to repaint the car British Racing Green as it is a favourite colour and all my ‘treasured’ cars throughout my driving years have been BRG. So, to the project list:

As I do not possess the skill or equipment to do this job, I asked Nigel Picken of Picken’s Bodyworks in Hobart if he would undertake the project. He agreed, and so we started, I stripped the car of all the ‘bling’ and delivered the car to Nigel. 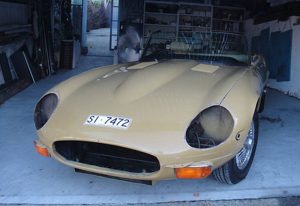 After about a week he gave me a ring and said that I had better come and have a look!

What a disaster, no rust but massive body damage around the rear and both sides almost as if the car had been in a ‘demolition derby’. The bogged up damage was so widespread that Nigel said some of the basic shape had been lost and to re-bog it would pose a major problem.
Decisions! This was my ‘baby’ and after all the work we had done in Project One, there was no going back. I went home and started looking for new panels for Nigel to fit.
In the end we replaced both rear wings, both rear light enclosures, both rear quarter panels, both side panels between the doors and the bonnet and the apron between the boot lid and rear bumper.
Sourcing the panels took some time and research but in the end the most economic outcome was using Martin Roby (MR) in the UK. I think they own the original presses and then sell to all the other dealers such as SNG Barratt etc. As a tip, it is worth joining the MR ‘Privilege Club’ for $50, as membership gives you a 10% discount i.e. if you are spending over $500 you are ahead and yes, I spent over $500! 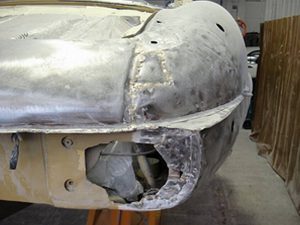 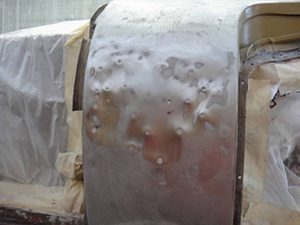 Delivery costs were only slightly cheaper than the cost of the panels but they usually only took about 7 days to arrive.
At this point my credit card bill was mounting up and I was beginning to question my decision to buy the car in the first place but “no looking back”. 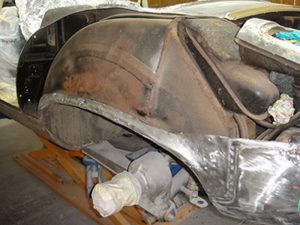 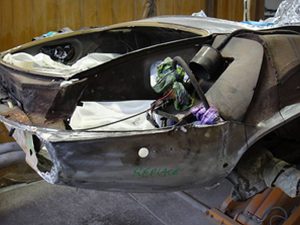 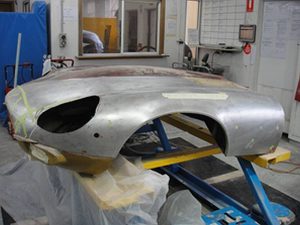 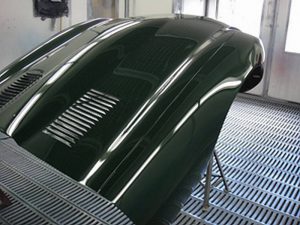 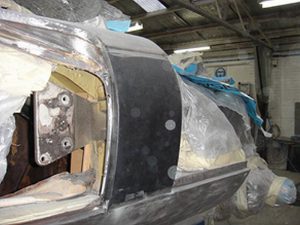 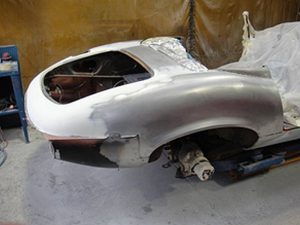 While I could not help with the major work, I was able to do some small jobs such as removing the glass and regulators from both doors so minor filling welds could be done to block up holes where some sort of ‘speed stripe’ had been screwed on! This allowed me to clean and service the locks and winding mechanisms as well as fit new plastic waterproof sheeting between the glass and inner trim. 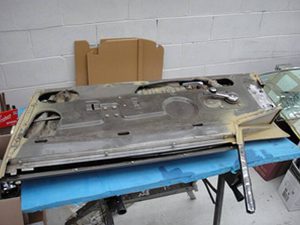 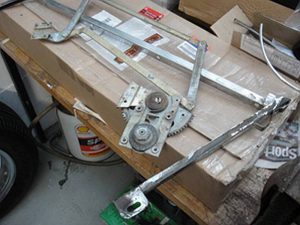 R & R was definitely a learning exercise, my workshop manual was almost useless! 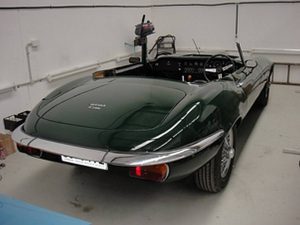 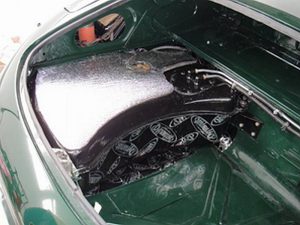 Reinstalling the petrol tank and refitting some ‘bling’ 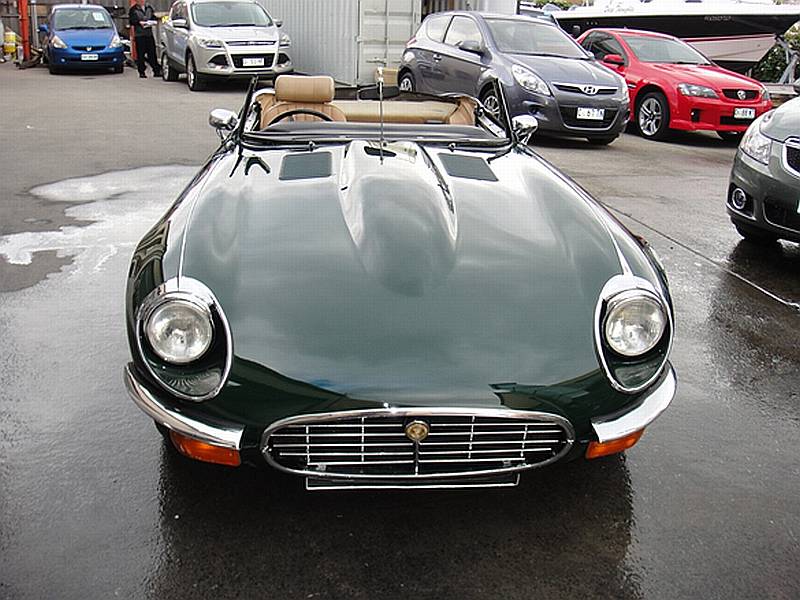 Most ‘bling’ refitted and ready to have the windscreen installed and drive home to start the interior.

The paint is a two-pack ‘Glasurit’ product and the BRG I finally chose was the 1973 Jaguar BRG. I wanted a colour I liked because there are so many to choose from. It just so happened it was the Jaguar colour.
I did not refit the US- required front and rear ‘clearance’ lights as I feel they spoil the clean lines of the car. Also, the terrible rubber overriders went and I fitted the earlier (’71-‘72) chrome ones with the rubber inserts. The radio aerial was also not refitted and I used an internal aerial. It’s okay around town but not too good in the country. Too much ‘bling’ spoils the lines in my opinion.

Clean and fit all new carpet to the interior and boot

This is the first part of both projects that I decided to do with no outside assistance. I bought a full carpet set from SNG Barratt (UK) in ‘biscuit’ colour, two boxes of ‘Dynamat’ sound proofing on the internet and about 5m of 10mm silver backed foam from the local foam shop.
My first job was to completely remove all carpet and trim from the inside of the car together with the old bitumastic sound deadening material. Once this was done, I used a rotary wire brush and sandpaper to prepare the metal. To seal the exposed metal I used a two-pack industrial epoxy paint which I brushed on and into all the little nooks and crannies. 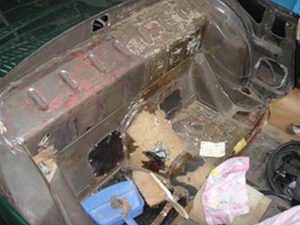 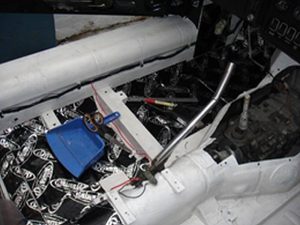 Removing all the old glue and felt; and the white epoxy paint and beginning the ‘Dynamat’

To try and get the best out of a box of nine sheets of ‘Dynamat’ it pays to be good at jigsaw puzzles. I used 18 sheets measuring 18” x 32” and had none left over, the product really does work and the finished job has made the car so much quieter. 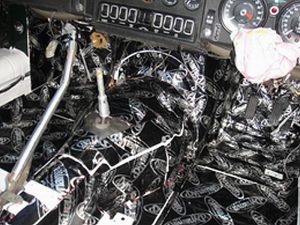 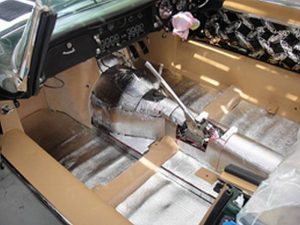 ‘Dynamat’ complete; and Foam and some carpet and leather fitted.

I also used the ‘Dynamat’ and foam throughout the boot area and used carpet in the boot rather than the original ‘Hardura’ vinyl product. For the side panels in the boot I cut out some thin plywood and glued the carpet to it. I got the additional carpet to do this job from Barratts who were able to supply me with 2 x 1m lengths of exactly the same Biscuit carpet as the interior kit. It may not be quite as serviceable as the ‘Hardura’ but it looks great!

Fit all new trim to the interior

As you are probably aware the E Type was not a really expensive car when new and consequently all the interior trim was vinyl. To start with, I planned to replace the old with new and had already bought new sill covers in vinyl when I changed my mind.
This whole project was undertaken in order to make the car into something I would keep and enjoy driving. So, I found an Australian leather supplier, Leffler in Victoria, and bought a whole hide in exactly the right biscuit colour.
Now the difficult bit, I am not a trimmer but lets’ give it a go, measure 4 times and cut once. Our spare room had this wonderful smell of leather and very slowly things began to come together. Again I replaced the very tired door cards with 2mm plywood to give more strength and shape. 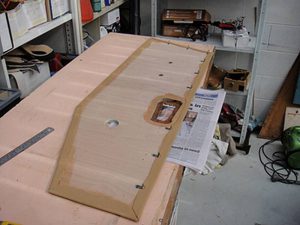 The new ply door card with leather glued on. 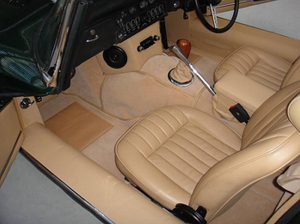 The finished all leather job, the seats had been recovered some 2-3 years before by the previous owner.

I decided not to reuse the original plastic centre console and, in its place, carpeted over the gearbox tunnel and made up a radio enclosure from 6mm plywood which was then covered in leather. As I did not have the skill or the sewing machine to saddle stitch various leather bits such as the centre box and armrests I got the assistance of Simon, a professional trimmer to help. He also complemented me on my trimming job and that was after I paid him! 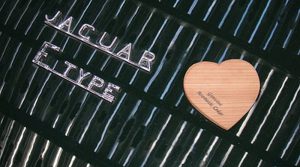 Left is a photo of a small heart shaped piece of fragrant timber which I found sewn under the vinyl reinforcement of the foot well carpet on the right side of the car (originally the passenger side). I only found it by chance when I cut the carpet to make way for the changed over accelerator pedal.

I feel that this was the original carpet and it would have been sewn in at the Jaguar factory, I am interested if any reader has ever come across one of these before.

Replace the hood and fit a tonneau cover

The original hood was black vinyl and I decided that a tan hood would go a lot better with the new BRG. I ordered the new hood and tonneau cover from XKs in the US which was about the best price. To start with, I thought I would be able to fit the hood but once I received the hood and removed it from the box I realised this was a job for a professional. It certainly was not a ‘clip-on’ job and needed to be properly glued to the front panel above the windscreen and the tension needed to be exact.
So Simon came to my aid by stripping off the old hood and we also repainted the hood frame in matching biscuit colour. Fitting the tonneau should have been easy but the cover did not reach the front corner press studs by about 100mm. Maybe a Series 2 cover? Anyway Simon was able to sew in a new piece and all was good. 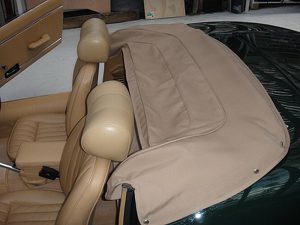 The new tan hood. I was really pleased with the decision to go from black to tan. 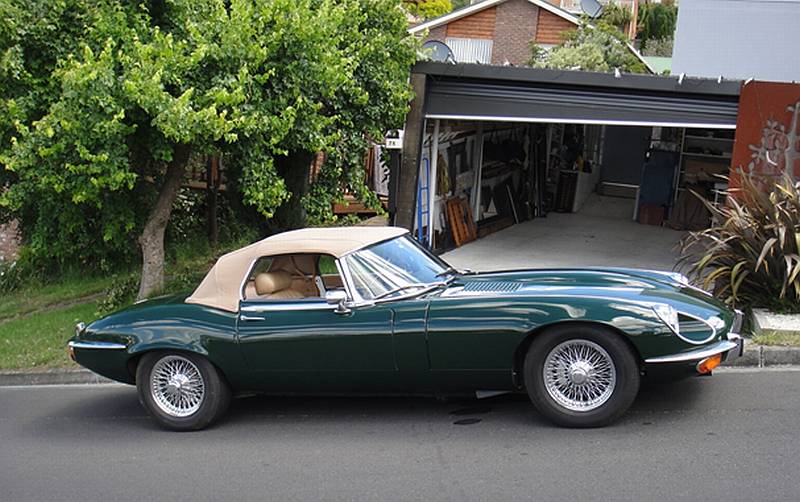 Well, as they say, “that’s it folks”. Project Part 2 is complete and the car is going really well. I have fitted a new SS exhaust system and will shortly be fitting a new aluminium radiator as I feel the 42 year old one has just about reached it’s ‘use by’ date.
At the recent National Jaguar Rally, in Launceston, the car won ‘Silver’ in the Concours D’etat and also a trophy from Jaguar Car Club of Tasmania. It also achieved ‘Best British Sports Car’ at the Devonport Motor Show. I must admit all of these awards were completely unexpected but made me feel that the last two years have been worth the effort!

I can be contacted via the Jaguar Car Club of Tasmania if you need any further information about this article.